"It’s our passion to invent something new. I hope the prosthesis will be well appreciated by the user and can be commercialised", says team manager Krzysztof Kadej. The Polish team Contur 2000 of the eponymous company started at CYBATLON in 2020 for the first time. Their approach: to combine the advantages of an active and a passive leg prosthesis in one device. "This solution offers the possibility of natural movement in various everyday situations", explains Krzysztof. Together with his team he has been working on the development for more than ten years. CYBATHLON is another source of inspiration for the developers.

"I'm an optimist, I like competition and new challenges", says Adrian Bak. Together with his wife and two children, the electrical engineer lives in Poland. He is a sporty guy, likes to snowboard or play soccer. Four years ago, he was involved in a traffic accident that resulted in the amputation of his left leg. His Contur 2000 prosthesis has both an active and a passive mode. Until now, he is not allowed to use it in his everyday life because it’s still a prototype which has not yet passed clinical tests. This makes it even more exciting for Adrian to train with it and to test his new skills at CYBATHLON. 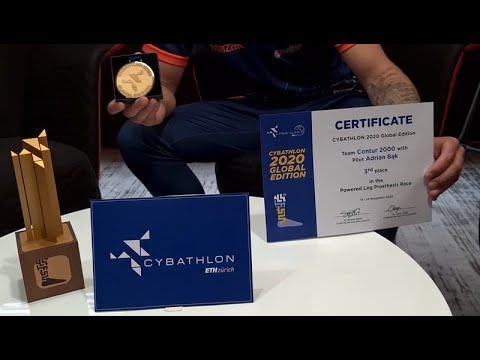