OPRA is starting this year with two teams: e- and x-OPRA. In 2016 one team of Chalmers University in Goteborg participated and took 3rd place. "Since 2016, we have been adjusting the algorithms to improve control and movement accuracy. We have also integrated sensory feedback," explains team manager Max Ortiz Catalan.

OPRA Osseointegration is a multidisciplinary team from Chalmers University of Technology, in collaboration with Sahlgrenska University Hospital (Region Västra Götaland) and Integrum AB. Osseointegration as a medical technique has been developed in the 1960ies and initially made a name for itself with dental implants. Later, the research shifted towards prostheses and their attachment to the bone. Today, the OPRA team relies on their intelligent technology, which makes sensory feedback possible in everyday life thanks to implanted eletrodes. "Prostheses often have difficulties in their implementation in clinical use, mostly due to reliability problems. Osseointegration solves this problem and enables us to use implantable neuromuscular interfaces in everyday life. We want to help patients regain the functionality lost through amputation and thus improve their quality of life," says Max. With his team and the two pilots he wants to show what their osseointegrated prostheses are capable of.

Magnus Niska is a Swedish nature boy who loves skiing and snowmobiling as much as the peace and quiet of fishing. He lives in Haparanda with his partner and their three children. For seven years now, he has been mastering his everyday life with his osseointegrated prosthesis with sensory feedback. “After an accident, a tumor grew in my right arm so that my forearm had to be amputated,” he describes this life-defining change.

Competing at CYBATHLON 2016 motivated and inspired him, and he was not entirely satisfied with his third place. The task with the wire loop, which had to be guided along a curved bar, was particularly difficult for him. “My prosthesis has no wrist, so I can neither turn nor flex the hand,” he explains. “I wish my next prosthesis had a motorized elbow and wrist joint”. But even without one, he goes to the CYBATHLON 2020 full of self-confidence: “I think I have a good chance this year, I want to win.”

Mölndals-Posten just published this nice article from their recent visit to our lab. Read about what it’s like to live with a bionic arm, the upcoming bionic legs and our work on pain, or just enjoy the lovely photos if Swedish is not your preferred language.

CBPR is a collaboration between Chalmers University of Technology, Sahlgrenska Universitetssjukhuset, Sahlgrenska akademin at Göteborgs universitet and #Integrum with funding from #Stiftelsenpromobilia, IngaBritt och Arne Lundbergs For ...

Eric Earley, postdoc at #CBPR and Chalmers University of Technology, helps out with social media and the aesthetics of the public outreach regarding #ICPLP2021. Thank you Eric for making everything look so tidy and professional!

Don’t forget to vote in the #ICPLP2021 Art Contest by Friday April 30th! Make sure to make your voice heard on how phantom limb pain is best illustrated: https://cbpr.se/art-contest/

Interested in brain plasticity? Dr. Max Ortiz Catalan talks with Prof. Sliman Bensmaia at the University of Chicago Division of Biological Sciences on the constraints of brain plasticity with regards to the somatosensory system (particularly touch).
Listen to this interesting chat on the latest episode of #ConversationsOnBionicsAndPain dedicated to a research article at
https://open.spotify.com/episode/0BQcNLttYhOmWnouz1ZoqO?si=kWewsByfQ56iGiabOIaVIA 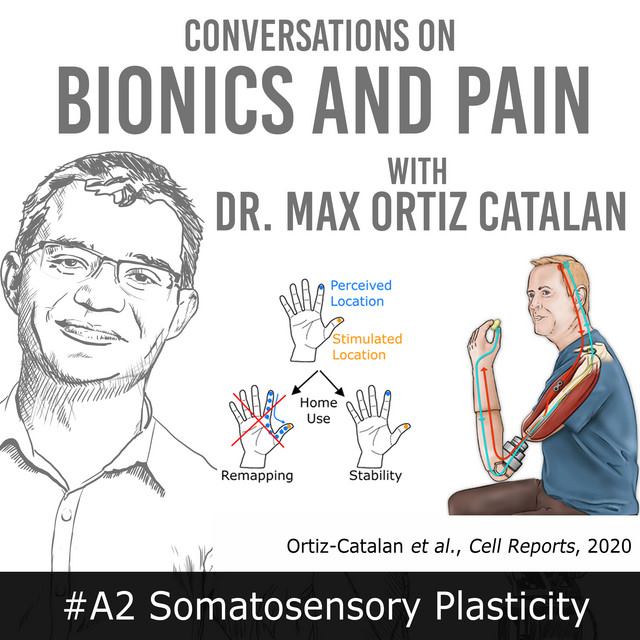 On the 3rd of May our postdoc Morten Bak Kristoffersen will defend his PhD thesis titled ”Serious gaming for learning the intuitive, non-natural control of prosthetic hands”!

Morten did his PhD at University Medical Center Groningen / University of Groningen with main supervisor Prof Corry van der Sluis, a common collborator of #CBPR. If you are interested in listening to Morten defend his thesis you can follow along at https://www.rug.nl/digitalphd on the 3rd of May at 14:30 CEST.

Are you a programmer with a flair for useability and games?

We are seeking someone to implement a serious game for neurorehabilitation of sensorimotor impairments.

If this sounds interesting to you, check out the link for the details and application!

Prof Paul S. Cederna’s group at University of Michigan , USA, developed the regenerative peripheral nerve interface (RPNI) to provide more control signals for prosthetic limb control. RPNIs are also effective at treating symptomatic neuromas and preventing the formation of neuromas. Come listen at #ICPLP2021 where he will share their experiences!

Dr. Bekrater-Bodmann at Central Institute for Mental Health, Mannheim, Germany studies phantom limb pain and its modulation by the induction of body-related illusions, such as mirror or rubber limb illusion, and is also investigating the beneficial effects of embodied prostheses on phantom limb pain. Come listen to him speak at #ICPLP2021!